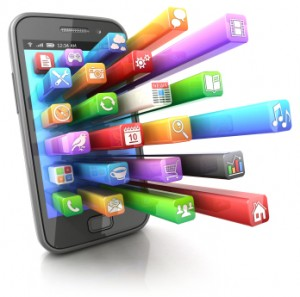 There are loads and loads and … loads of mobile apps available for both Android and iPhone. I juts had a look and it looks like iPhone and Android are more or less neck and neck with about 700,000 mobile apps each.

I guess Blackberry are fading and to be honest I never liked them much anyway (sorry Blackberry lovers). Oops, I must not forget Microsoft Windows for Mobiles which I am sure will burble along for a long, long time but still doesn’t look like it’s going to set the world on fire.

By the way, although I’m talking about mobile apps this includes tablets as they either use Apple OS or Android too. They are essentially the same as a mobile but with a bigger screen and less or no telephony functionality.

As you may have deduced I have not tried all of the mobile apps that are available 🙂 My list is purely subjective and I don’t keep up that much.  For that reason I’m going to look at types of mobile apps more than particular mobile apps. The point of the list is to suggest some mobile apps that you might like that you hadn’t thought about yet. The problem with so much choice is there are things you may not have come across yet.

Whilst I was looking about a came across a new kid on the block mobile operating system – Jolla, will it fly or will it die, too soon to tell. It looks like it’s aimed at the Chinese market.  See also www.jolla.com

Uh, oh! Some people avidly like one or the other, both or maybe don’t care. I have a preference and that’s Android. My wife has an iPhone 4 and I don’t like it much. I recognise that Apple pioneered this kind of mobile interface and Apple make some damn fine stuff, this I cannot deny. Apple’s marketing is brilliant so hats off to them for that.

There are two things I don’t like about the iPhone OS and that is Apple are a bit too proprietary for me and, iTunes, I really don’t like iTunes. It’s a heavy bit of software, gets in the way and I just don’t like using it. As Apple’s OS’s are built on top of Unix you would think they would be advocates of open systems but it seems they are not.

Android I like better, it’s an open system and I think it’s actually easier to use than the iPhone and, it integrates really well with Google, no surprise there 🙂 No iTunes either!

There are a lot more Androids than there are iPhone’s.  iPhones are expensive and if you want to use the iPhone OS there is only the iPhone. With Android you can pick your make and model of device of which there are many.

The 15 mobile apps in no particular order

Many of the mobile apps I mention are probably available for both iPhone and Android.

These are must haves in my opinion

What are your favourite mobile apps?

Also see My 10 favourite free utilities and Useful stuff for making videos and a bit more (some free).
[sc:MySig]